In this summer, heavy storms took aim at some parts of Pakistan and caused flood damage. Suffering two storms, Goldwind’s project in Pakistan, Three Gorges 1st, 2nd and 3rd wind farms, were seriously affected. After the flood, Goldwind quickly responded by setting up a special team to assist the owner in draining and repairing the faults. Goldwind’s turbines withstood the test of the flood, and showed reliability. Its O&M team also won recognition and appreciation of the owner. 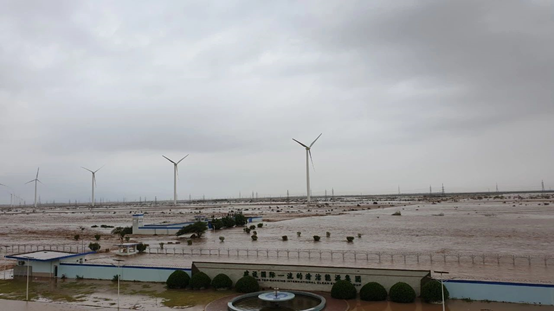 The Three Gorges project is located in arid desert area in the eastern part of Karachi, Pakistan, which is prone to rainfall accumulation due to soil quality. On June 29th, heavy rains fell down and quickly flooded the area. Poor grid conditions and natural environment caused protective passive shutdown of the whole project. Under the emergency, Goldwind made judgment in time that all parties should cooperate and take the turbines off the grid. Meanwhile, it held a centralized meeting to make full deployment. After comprehensive judgment of the disaster situation, personnel capacity and spare parts supply, and ensuring no secondary damage would occur to the wind turbines, on-site staff partnered with the owner in the recovery work. The road was washed away and kept out the vehicles. Goldwind staff waded into the water and arrived on foot. The spare parts were excessively consumed, and they conducted maintenance test on their own to ensure normal use. The manpower was insufficient, so they hired qualified locals to join in the emergency repair. Confronted with the flooding water in the turbine, Goldwind team conquered difficulties, and showed clear and orderly division of labor in the process. After four days’ efforts, apart from two turbines in the watercourse, all the others resumed grid connection.

After the first resumption of grid connection, Goldwind staff at Pakistan received a weather forecast indicating that heavy rains would fall again on August 11th. Experience had told them that secondary flooding might have severer impact on the project; however, exhaustion overwhelmed these people after several days of continuous fighting. Without full preparation, the safety risks would increase greatly. Under this circumstance, Yang Jianyong, head of regional service, mobilized everyone; Zhao Zhongzhong, assistant project manager, organized a centralized meeting to emphasize safety issues; and Men Wendong, manager of regional maintenance warehouse, coordinated spare parts resources. With clear division of labor, the team worked together and fully prepared for the next storm.

On August 11th, the rainstorm arrived as expected, but Goldwind employees had got ready. After 7 days of on-site battles, the effects of heavy rains and floods were all eliminated, and all wind farms resumed normal operation. On August 26th, the Pakistani service company received a letter of thanks from the owner China Three Gorges, who highly appreciated our work attitude and contribution. In the emergency rescue, Goldwind headquarters and the on-site project team worked closely together, and by quick response, scientific dispatch and carefully deployment, they ensured safety and quality at all levels, and united to conquer difficulties like harsh environment and lack of resources. Once again, Goldwind’s reliable product technology and excellent team have been verified.