He was born in Gobi Desert of Xinjiang, the farthest place from the sea in China, but longed for an offshore expedition.

As he grew and grew, he walked through the intertidal zone, tested the coastal waters, and moved step by step towards the deeper ocean.

Going through the corrosion of seat water and salt mist, harsh frost of the North Sea, and roaring wind and waves, he always reveres the sea, but gains more courage from each encounter with it.

He is Goldwind, the first Chinese wind power company that started the offshore odyssey. After 12 years of offshore exploration and adventure, Goldwind has made an extraordinary relationship with the sea. 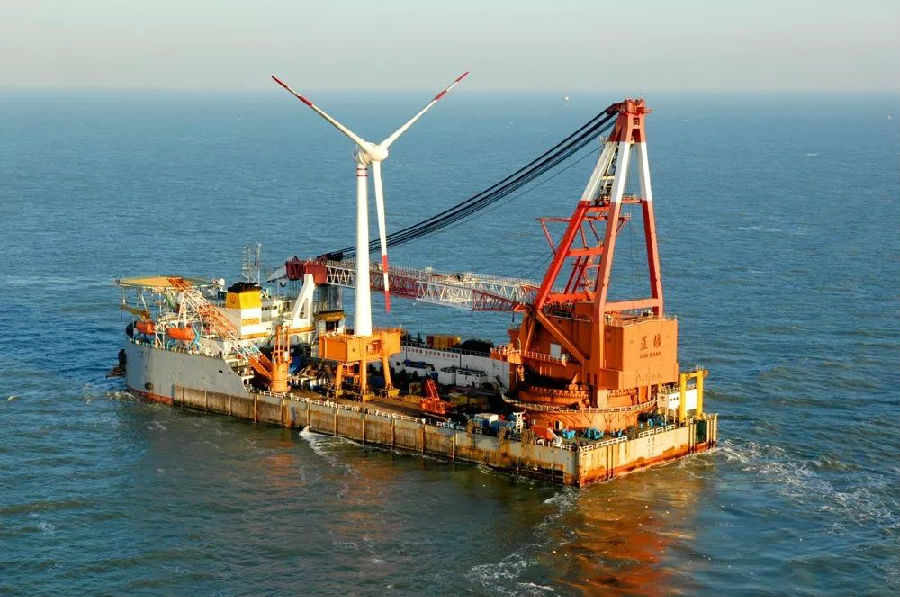 Did you know that China's first offshore wind farm was actually a drilling platform?

There was only one wind turbine at the “offshore wind farm” at that time. As early as 2007, Goldwind worked with China National Offshore Oil Corporation (CNOOC) to start the offshore wind power exploration. That year, a 1.5 MW permanent magnet direct drive wind turbine was installed on CNOOC's drilling platform in the Bohai Sea, to provide the oil field facilities with the necessary power for production.

That turbine has accumulated valuable experience in the technological development of offshore wind power in China.

Wind power “stepped into the sea”, and offshore wind power was officially at the stage of “intertidal zone”.

According to the data in 2014, Goldwind’s 2.5 MW wind turbine ranked first with 2,867 utilization hours among the testing turbines. Since 2011, with excellent performance, Goldwind had won two 50 MW projects of China Longyuan Power Group. China's offshore wind power industry had taken another step towards the deep sea. 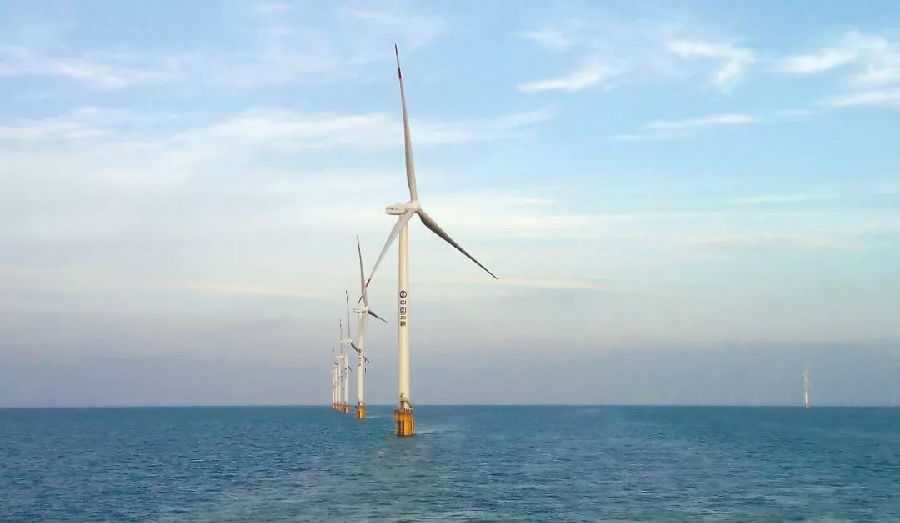 The Xiangshui offshore wind power project of China Three Gorges Corporation was 10 km from the shore. The wind farm covered a coastline of about 13.4 km and a sea area of 34.7 km2, and the water depth at the wind farm’s operational area was between 8 m and 12 m. The total installed capacity of the project was 202 MW, making it the largest offshore wind power project (completed in one project period) built in China at that time.

In 2015, Goldwind won the bid for the project with a 3 MW model, in which 18 offshore wind turbines of Goldwind were installed. Goldwind had taken another step forward towards the deep sea. 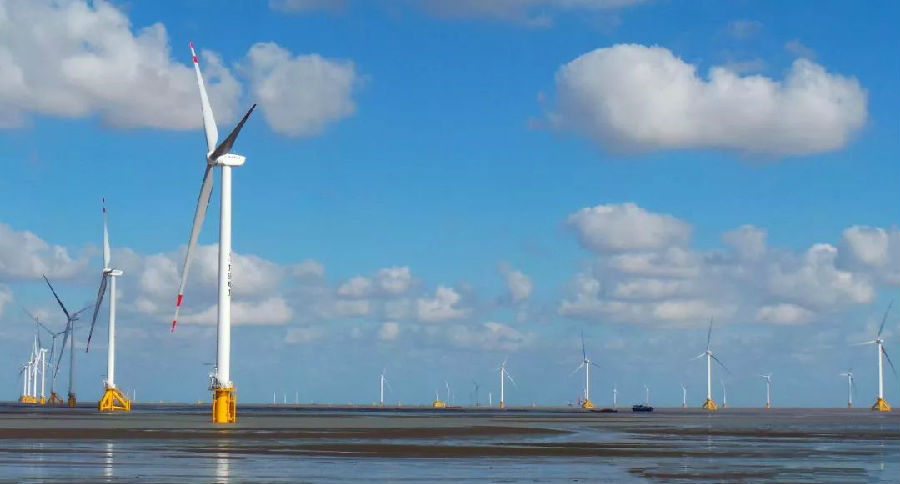 25 km from the shore, the project consisted of 80 Goldwind’s 2.5 MW wind turbines.

The Jiangsu Dafeng (H12) 200 MW (concession) offshore wind power project of China Longyuan Power Group was located in the intertidal zone, where large-scale floating crane could not enter. The substation was installed by modules and each module was designed to be within 500 tons, which was the first application both at home and abroad. The project also set a unique global precedent of laying 28.6 km of 220 kV submarine cables without connectors.

In November 2017, the project's operation and maintenance team made a record that it commissioned and connected 32 wind turbines to the grid in 24 hours, a benchmark for domestic offshore wind power projects.

In March 2018, all the wind turbines of the project were connected to the grid. With an annual average wind speed of 6.76 m/s, the project’s actual energy production exceeded 700 million kWh and the equivalent hours at full capacity reached 3,728 hours, which ranked first among Jiangsu’s operating offshore wind power projects.

2017, Zhuanghe, Liaoning, The first 6 MW wind turbine in the frozen area of the north 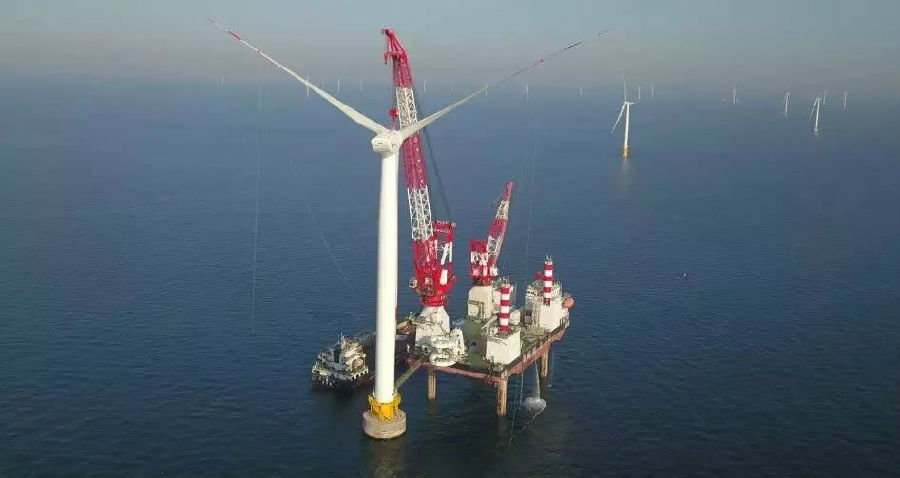 Goldwind had done much work on the turbine design, control algorithm, and load calculation and optimization of ice-resistant structure for the project, so that the turbine could fully adapt to the floating ice of the sea in the north.

When completed, the project would produce 714 million kWh of electricity per year, which would cover the annual electricity consumption of 450,000 households. 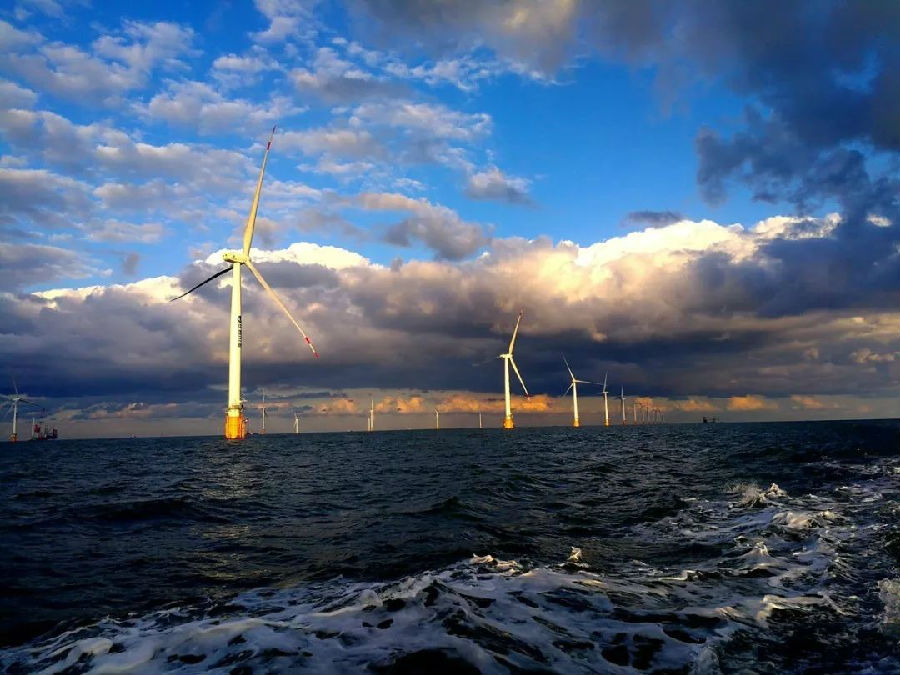 The farthest wind power project from the shore in China.

The wind farm center of Jiangsu Dafeng 300 MW offshore wind power project of Three Gorges New Energy was 45 km from the shore, the water depth at the wind farm’s operational area was between 10 m and 17 m. 54 units of GW140-3.3MW wind turbines and 19 units of GW171-6.45MW wind turbines were installed and tested in the deep sea. The first large diameter (7 m to 8 m) monopile in China was successfully installed here.

As the wind farm was far from the shore, and the installation and transportation were complex, the project used the tower-foundation assembly in offshore wind turbine installation, a cutting-edge technology first applied in the world. In this regard, Goldwind optimized the design of product and control algorithm to ensure the smooth progress of the project. When the project is completed and put into operation, about 797 million kWh of electricity will be connected to the grid annually.

The Phase I of Fujian Xinghua Bay offshore wind power project was a prototype testing wind farm, it was the first offshore wind farm to use 5 MW and above wind turbines on a large scale in China. It had a total installed capacity of 77.4 MW and installed 14 units of 5 MW and above wind turbines provided by 8 domestic and foreign mainstream manufacturers.

Goldwind’s more offshore stories are to be continued...