The first commercial GW155-4.5MW unit connects to the grid 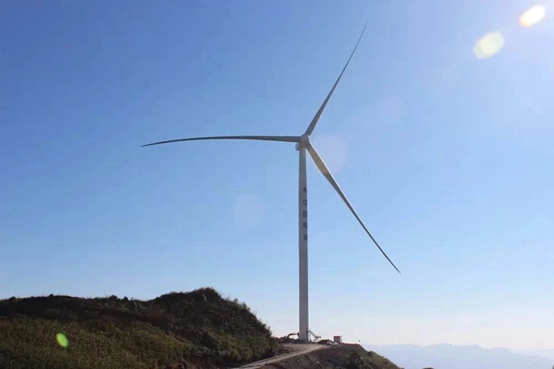 The wind farm is located in Guizhou Province, China, with a total installed capacity of 49.5MW. The altitude of the wind farm is between 1,795m and 1,888m, and the altitude difference from the county is 780m. It is a typical mountainous project in southern China. Since turbine locations of the project are not abundant, among which seven locations’ wind speeds are above 6m/s, seven GW155-4.5MW and nine GW121-2.0MW units are used for mixed arrangement. The GW155-4.5MW has a large single unit capacity, which can effectively cope with the restriction of the number of turbine locations on the development of mountainous projects, controlling investment costs while reducing environmental impact.

According to calculations, the wind farm is expected to achieve 113 million kWh of on-grid electricity each year, which equals to saving 34,200 tons of standard coal, and reducing 665.26 tons of SO2 and 10,100 tons of ash emissions. This is a significant contribution to local economic development and ecological protection.