Wang Haibo: Goldwind Takes Digitalisation to the Next Level 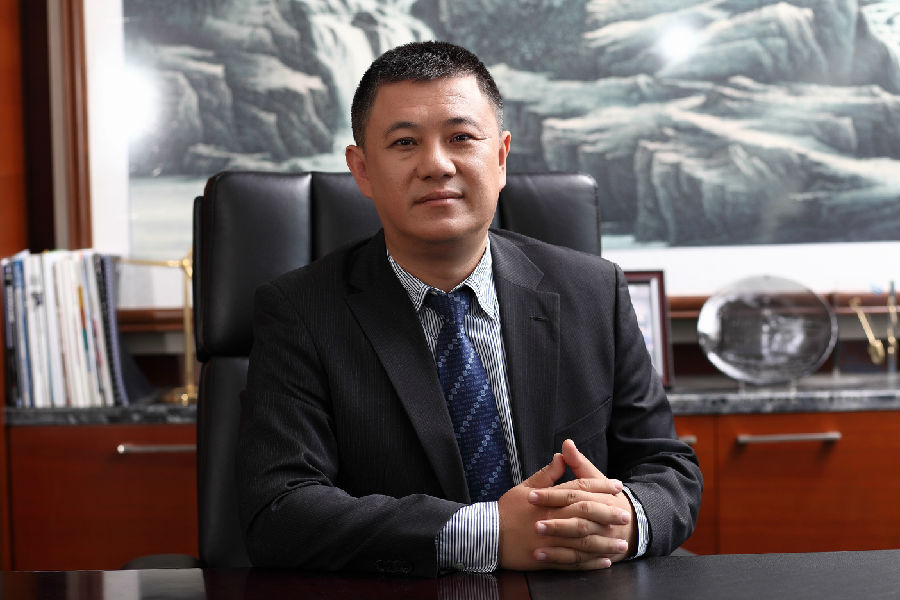 He should know. China’s leading wind turbine maker has invested heavily in digitalising its business and product offerings in a bid to cut costs and find a new range of cash streams.

While many of its international OEM rivals are embarking on a similar journey, Goldwind’s digitalisation is going further than most.

Power generation remains the core business, but the company is now an integrated renewables “solution provider”, Wang tells Recharge, offering digital-based solutions to virtually every aspect of the wind industry — such as turbine optimisation, wind farm design, grid operations, demand-side management, distributed energy, micro-grids and even financing. And Goldwind is looking to go even further. Its multi-million-dollar investment in zPark Capital — a US venture-capital fund targeting early-stage technology such as data mining, robots, drones and the Internet of Things (IoT) — is a sign of things to come.

Goldwind’s most recent software application is “EFarm” — an integrated control system for wind farms that collects information from Lidar sensors, analyses them using complex algorithms, and then instructs turbines to adjust so they can always capture the most wind possible and dodge potential damage in extreme weather conditions. The software increases the yield of a project by 2-3%, Wang says.

Deep data analysis is becoming easier due to the increased computer power being enabled by blockchain and cloud services, which allow wind developers to make more complex, but more targeted wind farm designs. “We need only a day to compute for 50 turbines — before we needed seven months for a wind farm,” Wang tells Recharge.

“That means customized wind turbines and wind farms become possible — something that we have been very vocal about, but were unable to achieve due to lacking computer power.

“Customisation means taking each turbine’s unique conditions into consideration, and adjusting its height, capacity or position to yield the best result.”

Goldwind has already rolled out this customisation at several projects, and the results look promising. Wang explains that construction of a 50MW wind farm in China could save around 30m yuan ($4.75m) from the average 350m-yuan capital expenditure.

As well as managing and designing individual wind farms, cost savings can also be made by managing many wind farms from a single location.

China’s biggest energy company, State Grid, is already using this service in Qinghai province, with 15 wind farms joining the platform. Goldwind helped to set up the IoT network for the system and also provides “management know-how”.

“Traditionally, ten wind farms are operated by ten separate O&M teams. So why not develop one team shared by all these wind farms?” asks Wang.

On a slightly smaller, but no less important scale, Goldwind is also offering services to manage micro-grids and hybrid projects — ensuring that the supply from multiple variable energy sources are best matched to the fluctuating demand, so clients can sell electricity at the highest market price possible.

Goldwind made its debut in this market back in 2012, building a pilot hybrid micro-grid power complex in its backyard, the 200-acre Goldwind industrial park in Beijing.

Initially, the project was able to meet 32% of the industrial park’s electricity demand during peak hours, but after years of optimisation, the system is now able to generate more energy than Goldwind needs, and sells its excess power to the grid.

“It proves again that an energy system with a large portion of renewables is technically feasible and economically viable,” says Wang.

Goldwind’s ambition, he adds, is to “make renewable power a reliable partner”.

“Once we improve our capacity [to provide reliable green power], we could also help the grid to develop demand-side digital management.”

The ultimate goal of all these efforts is to “create value” and “create new markets [for renewable energy],” says Wang.

To achieve that, Wang says the wind industry as a whole needs to utilise digitalisation to “divert the traffic”— jargon often used by Chinese web-based companies that refers to online activities to attract market attention and eventually harvest large capital investment.

“All you need to do is to drop a pin on the map [of FreeMeso] or set the targeted region,” Wang explains. “The platform will automatically provide all the information needed for wind project development. It will advise you the best site, the most economic turbine choices, the transportation routes and other factors crucial for wind farm investment.

“It even generates the hypothetical financial reports for investment reference.”

The grand vision behind FreeMeso, he says, is to “bring down the technical barrier for the outsider [investor, developers] to get into the wind arena”.

“A high barrier may be a good thing for insiders to prevent competition. But the industry risks lacking investment in the long run.”

The need for such software, he says, is shown by the meteoric growth of the solar sector, which installed 53GW of new capacity in China last year — the first time a renewable source has put up more capacity than the coal sector. At the same time, wind installations fell by 4%, year on year.

Wang believes that a lack of transparency in the wind sector has been a major factor in wind’s relatively poor performance because it sends a signal to financiers that the risks involved are high. As a result, banks ask for higher interest rates, increasing financial costs for developers.

“Imagine we could bring down the interest rate [in China] by 1%,” Wang says, before making a quick calculation. “That means a 3% increase in ROE [returns on equity]. For a 50MW wind project, it is [an increase of] 30m-yuan NPV [net present value].”

Digitalisation in that sense has much to offer, as “a key value in the data-led world is transparency”.

“What Goldwind needs to do is to actively lower the barriers by making our know-how available through digital means. Only then can we attract the new investors,” says Wang.

Another step in this direction was taken in 2016 when the company issued China’s first green asset-backed securities, in which five-year revenues from five of its wind farms were offered to the debt market.

The computing capability to “connect the wind asset to the securities market” was crucial.

In the future, “any individual investor could chip in to wind farm assets through a financial product”, says Wang. “They can check the revenues of a wind farm daily and even the balance sheet of each turbine. Once that step becomes more seamless, we will be able to attract more capital.”

Goldwind may be moving faster and further towards digitalisation than rivals in the wind industry, but it is still exploring other areas that remain relatively untapped, such as offshore wind, where more data about the sea is needed.

For Goldwind, at least, the wind industry’s story of digitalization is only just beginning.

Drones: the end of the road?

Another area that could potentially bring vast cost savings to wind farms is the use of drones.

These little flying machines, combined with cloud computing services and GIS technology, could become the “CT scanner” for wind sites — and be “a great replacement” for human workers, says Wang.

And with fewer workers needed on the ground, “we will eventually build wind farms without any controlling tower, or any road”.

“Roads are notorious as the lowest-yielding asset in a wind project,” says Wang. “And soon, they could be stripped from the balance sheet.”